I’ve been taking the Divine Harmony Forgiveness combination for the past month. I was aware that I wasn’t feeling at peace with things that happened in my life last year. While, on a spiritual level, I could see that everything I experienced was necessary and transformative, there was still a lot of emotional pain which meant I couldn’t accept, let go or move on.

When I took time to feel into the emotions that needed to be honoured before I could move on, I got in touch with feelings of regret and guilt about choices I’d made. I wished things had been different, and that stopped me feeling at peace with how things were. I also felt angry with a couple of people whose actions had hurt me, so I couldn’t make my peace with them either.

Which essence to choose? 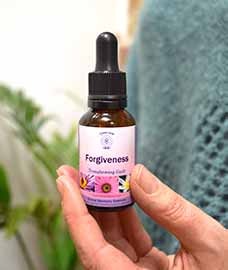 Three things happened in quick succession. A friend told me about a self-forgiveness practice she had started doing and as she spoke I could feel the energy of her words. They carried a particular vibration which felt so soft and loving that I realised there was a difference between what she was embodying and how I’d been treating myself.

Next morning as I was just waking up after a night of vivid dreams, I could feel a beautiful soft loving energy all around me and within me. It felt like a transmission of the energy of forgiveness. How different would things be, I wondered, if I could embody more of this energy? If I could truly release all that was not that within me, and anchor this vibration in my heart instead? It felt utterly delicious and I could instantly see how things would be different. Inspired by that, I followed a prompt to go to a book I haven’t looked at in years called Angel Blessings by Kimberley Marooney. I turned to the page on the Angel of Forgiveness and saw this message:

When the behaviour of another hurts you, this is a message from your Eternal Self exposing hidden feelings of guilt, shame and self-hatred. If you had no such feelings, the other person’s actions would leave you undisturbed. The first step is to admit how you really feel.

‘When the behaviour of another hurts you, this is a message from your Eternal Self exposing hidden feelings of guilt, shame and self-hatred. If you had no such feelings, the other person’s actions would leave you undisturbed.  The first step is to admit how you really feel.’

Aha! Reading that was a real lightbulb moment.  Although I’ve used Pine Bach Flower Remedy a lot over the years, I realised that a hidden layer guilt, shame and self-hatred was now ready to be released.  I started taking the Forgiveness combination later that day.

While taking it, I felt a release of the insidious feelings of guilt that had been making me beat myself up a lot. Even though it wasn’t conscious, I realised I’d been punishing myself in lots of subtle ways. I’m now being much kinder to myself and making choices which are the choices that somebody who loves themselves makes, rather than choices that someone who is secretly punishing themselves would make.

I’ve had healing conversations with people who have been affected by my choices where I’ve been able to simply take responsibility and apologise for the negative impact on them without feeling guilty. There hasn’t been the emotional charge I’ve felt in the past where my guilt would get triggered and that would keep us locked into an unhealthy dynamic.

I no longer feel hurt by the people I was struggling to forgive – instead I feel real peace, love and gratitude towards them. Truly it feels like there’s nothing to forgive. They simply reflected back to me my own lack of love towards myself. I feel like I’ve let go of a huge burden that was holding me back without me even realising I was carrying it. Life feels so much lighter, I feel so much lighter and I’m laughing more. I have much more energy, am waking earlier in the morning feeling glad to be alive and am more creatively inspired.

I find the Divine Harmony combinations to be very effective at bringing the light of awareness to the emotions that keep us stuck so we can experience more of our true nature.

The Forgivessness Essence is focussed on helping you to forgive and move on. It helps to dissolve the vibrations of guilt and over responsibility, release judgement and self-condemnation and promote acceptance and self-love. It is one of the Essences in the Divine Harmony Essence range and is a combination of Flower, Gem & Crystal Essences.

More: The Divine Harmony Essences | How to Use

Jackie Stewart has been using Crystal Herbs essences for over 20 years. She is a Flower and Vibrational Essence Practitioner and Tutor who is passionate about how essences help us open our hearts to co-create a world that thrives on Love.

Essences to help with the Energies through January Letting Go Essence A really useful essence helping you to work with emotional pain, perhaps caused by separation, divorce or bereavement. Also good if you are too […]

Our Flower, Gem & Crystal Essence
Suggestions for May

Useful Flower, Gem & Crystal Essences for May May certainly promises to be a month of highly potent energies that will offer us many blessings and opportunities. However because we still live in a world […]

If you would like to find out more about Flower Essences, Bach Flower Remedies and personal growth, why not attend a Flower Essence workshop? There is one coming up in London on the 21st May […]

What do you think? Cancel reply