Almost all the information that we have about Dr Bach’s life comes either from the books, letters and pamphlets that he choose to leave behind, or from the biography of him written by Nora Weeks, who worked closely with him during his years at Sotwell. In "The Medical Discoveries of Edward Bach Physician" Nora provides us with much fascinating information about his work but very little information about his private life. Bach himself carefully destroyed many of his letters and pamphlets before his death leaving only those that he wished others to see. We know from public records, that he married twice and had a daughter during his life but no mention of this is made in his biography, leaving us to fill in the gaps of the private face of Dr Bach for ourselves.

The same driving force is evident throughout all of Dr Bach’s life, namely his absolute determination to find the truth about human illness & disease and to provide a cure in the form of a simple medicine available for all.

Edward Bach was born 1886 in Mosely near Birmingham. According to Nora Weeks the young Edward was a boy of determined nature, possessing great powers of concentration for those things that interested him. He had a great love of nature and overwhelming compassion for any who suffered. Even as a boy he dreamed of finding a simple form of medicine that would cure all forms of disease and also that healing power flowed from his hands - a dream which he realised during the course of his life.

On leaving school at the age of 16 the young Bach started his working life in the family brass foundry. Although he was determined to follow his dreams it seems that he found it difficult to ask his father for the necessary money and support that would be required for him to study medicine. During the three years that he worked in his father’s factories he studied the men that he worked with, noticing their difficulties and illnesses and how little real help the medical profession of his day could offer them. This increased his determination to study all known methods of cure, and he approached his father, who gladly offered the necessary support that would allow him to begin his studies at medical school.

At the age of 20 he entered Birmingham University, going on to University College Hospital in London to complete his studies. He qualified in 1912.

Even as a medical student Edward Bach spent little time with his books, since to him the true study of disease lay in observation of the patient and their differing reactions to their disease. He recognised that the same treatment did not always cure the same disease in all patients. He started to notice that those patients who shared similar personality characteristics often responded to similar treatment while others with different traits would need different treatment, although all were suffering from the same complaint. Practical experience and observation were the only true way of learning as far as he was concerned, and he had little use for accepted theories unless he could prove them for himself.

Nora Weeks worked with Dr Bach for many years, and this book gives a wonderful account of his life and his work, through the eyes of someone who knew him. A must for anyone wanting to find out more about Dr Bach and his life and work.

His work as an immunologist & the discovery of the 7 Nosodes.

In 1913 Bach became causality medical officer at University College Hospital and later in the same year casualty house surgeon at the National Temperance Hospital, However ill health forced him to give up the latter post and after a period of recovery he took a consulting room in Harley Street where he soon had a very busy practice. The busier he was the more dissatisfied he became with the results that he could achieve using orthodox medicine. He felt that at best he was only palliating and relieving symptoms and was even more convinced that the personalities of his patients should be given at least as much consideration as their symptoms. He began to look around at other methods of healing and became interested in immunology, taking up the post of Assistant Bacteriologist at University College Hospital. His pioneering work in this field eventually became famous throughout the medical profession. As a result of his research into intestinal bacteria he developed a series of nosodes or vaccines, which enabled him to help many with chronic disease who had previously been beyond help. These are now known as the Bach Nosodes. Again Bach was struck by the fact that the personality traits of those needing a particular nosode were usually similar and he eventually was able to prescribe the correct nosode for a patient based on personality alone.

He was an incredibly hard working man and the punishing schedule of patient responsibilities and research work that he set himself to accomplish began to take its toll of his health. Nora Weeks tells us that in 1917 he collapsed with a severe haemorrhage in the stomach and was operated on in his own hospital. The severity of the problem was such that he was given only three months to live. Desperate to continue with the work that he knew was not finished he pushed himself back to work as soon as he was able to walk and immersed himself in his experiments. At the end of three months he was surprised to discover that he was fully recovered.

1918 he left University College Hospital and set up his own laboratories to continue his research.

In 1919 took up the position of pathologist and bacteriologist at London Homeopathic Hospital, where he discovered for the first time the work of Samuel Hahnemann, founder of homeopathy. As he read Hahnemann’s great work, the Organon, he was struck by the similarity of Hahnemann’s ideas to his own – treat the patient not the disease – was the message reiterated over and over again. Incorporating Hahnemann’s ideas with his own Bach began to make his nosodes by the homeopathic method of preparation, thus eliminating the need for a hypodermic syringe to administer the doses. Over the next several years Bach researched and refined his nosodes further, publishing his results in his pamphlets and books and the many public addresses that he gave. He became extremely well known in medical circles and very busy at his Harley street clinic. 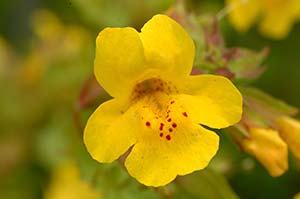 The beautiful Mimulus flower, one of the flowers that Dr. Bach used in his set of 38 Bach Remedies.

As successful as he was Bach knew that he had not yet found the simple form of medicine that he sort. Although the nosodes were very good they did not cure all cases and they were not made from the natural substances that he dreamed of. He began actively searching for plants with the same patterning and signature that would take the place of the nosodes. However it was not until 1928 that the pieces of his puzzle began to fall into place. Diverting himself at a large dinner party by observing the other guests, he suddenly had the inspirational recognition that there were in fact more than the seven personality types that he had identified through his work with the nosodes. In that moment of inspiration he saw that as a group, all of humanity belonged to particular ‘type groups’. From that moment on he redoubled his efforts to observe the way his patients reacted to their lives and circumstances, meticulously documenting all his findings and expanding his ‘type groups’.

The blue plaque on the outside of Dr. Bach's house in Cromer, Norfolk. Dr Bach had a four year association with Cromer, from 1930 to 1934.

In September of 1928 he had a sudden intuition to go to Wales where he discovered his first two flowers; Impatiens and Mimulus, followed later in the same year by Clematis. He began using the remedies he prepared from these flowers on his patients and was so encouraged by the results that he decided to discontinue any other forms of treatment and to continue his search for other flowers to extend his work.

Early in 1930 he closed down all his work in London and left for Wales to search for the other flowers and plants that he needed to complete his work. Thus began the last phase of his life and one that could not have been easy to follow. He was at the time a very respected and eminent man in his field. Very few of his colleagues could follow his reasoning for the apparently sudden change of direction that he was about to take and many tried to make him change his mind. However to no avail, as he was absolutely convinced of his way forward. The result as we now know was his eventual discovery of 38 different remedies, together with the two unique methods of preparation that he developed for them. 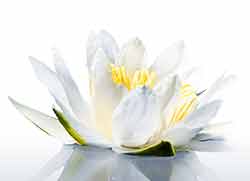 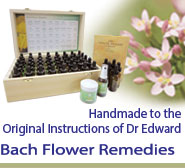 About the Bach Flower Remedies

Flower Essence Shop Choose An Essence Search for an Essence

Essence of the Month